Parents, here is why you should keep your teen away from the world of cosmetics

Written by Sahana Charan and published on 11 May 2021.

Using substandard skin products and fairness creams can have disastrous side-effects on your teenager. Parents, encourage her to be happy with her complexion 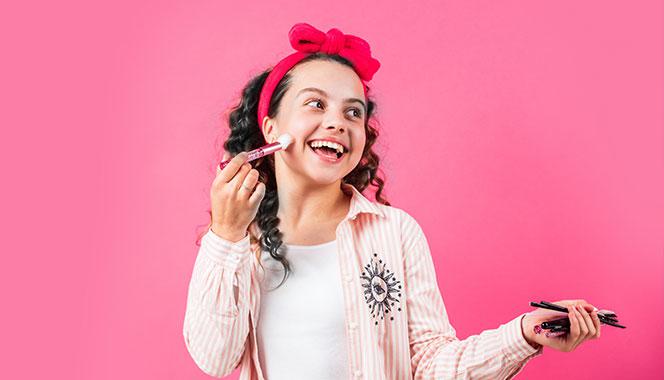 After seeing an online advertisement for a skin lightening product, 14-year-old Varsha got excited and decided to order the cream, without the knowledge of her parents. The insensitive comments that her relatives often passed about her dusky complexion, made her feel inadequate. This cosmetic promised quick results and glowing, light skin. Little did the teen know that it was a substandard product that contained harmful chemicals and had not gone through strict quality checks. Varsha was shocked when she developed bright red rashes all over her face. A visit to the doctor confirmed her worst fears. Varsha's experience is not uncommon.

Youngsters often face body image issues, and they may try to measure up to the unrealistic beauty standards projected by celebrities. This makes them try fairness creams, make-up and cosmetics. Teens also want immediate results and that's why they fall for substandard beauty products that can have adverse effects on their skin.

"Using a good cosmetic as per medical opinion is probably okay. But in their hurry to overdo things teenagers commit some cardinal mistakes." - Dr Anil Abraham, noted Bangalore-based dermatologist.

What are these mistakes?

Apart from trying cheap products, which teens may buy with their limited pocket money, they also try cosmetics that are not meant for them.

Fitting in should not depend on fairness. Even though this may sound radical, I wish film stars who claim to be role models would refuse outright to advertise fairness products. Experts say that bleaching creams were originally meant for use by women to lighten the colour of their facial hair in women to make them less visible and are now marketed as fairness creams.

What can parents do?

In our society, the majority of people are obsessed with certain western beauty ideals and this can lead to discrimination based on colour and looks. Even parents may unknowingly try to impose such standards on their children. Teens who constantly face bias because of the way they look, are likely to be low in confidence. Parents must desist from comparisons and comments on skin colour. Fitting in should not depend on fairness. Even though this may sound radical, I wish film stars who claim to be role models would refuse outright to advertise fairness products. The concept that fair skin is needed to get a job or fall in love is ridiculous and advertising ombudsmen should come down heavily on such regressive advertising, adds Dr Abraham.

Help your teens choose a healthy lifestyle and natural beauty over dangerous and harsh make-up and beauty products. It will help them in the long run.

All parents strive to ensure their childrens physical and mental well-being. But invariably, some decisions they take may be harmful for their kids health. Heres how to avoid making these mistakes