Written by Team ParentCircle and published on 03 June 2021. Geeta Sanjeev noticed that her four-year-old son was constantly scratching his left ear and poking it with his fingers. She thought it was a case of an ear infection and took him to a pediatrician. To her surprise, the doctor said it was a case of ear wax accumulation and recommended that she take him to an ENT specialist for removal.

Earwax build-up in toddlers is a common issue. Whenever parents see earwax in their children's ears, they reach for the earbud to get rid of the accumulated earwax. But what is the right way to remove it? If untreated, earwax can turn hard and dry, which can lead to hearing problems.

A substance that is secreted in the outer ear canals, earwax primarily protects the skin of the human ear canal. In addition, it provides protection against water, insects and other types of fungi and bacteria. The major components of earwax are fatty acids, alcohols, squalene, and cholesterol. Ear wax is also known as 'cerumen.'

How does earwax accumulate in infants and toddlers?

The ears secrete earwax as a way of preventing the eardrum from getting damaged by dirt, dust and other particles. Usually, the earwax finds its own way out of the ear canal. However, sometimes, it might accumulate and turn hard causing irritation in the ear.

While cleaning your toddler's ears with cotton swabs, you might accidentally push the earwax deeper into the ear canals leading to blockage. Some children might also use their fingers, which push back the accumulated wax.

Ways to remove earwax in toddlers

1. Put the head in a raised position

Try to hold the toddler's head in a raised position for some minutes. The position should enable you to put ear drops without spilling them. This will make the removal of the toddler's earwax easier. Use a soft washcloth to clean the outside of your child's ears. With the passage of time, the earwax inside the ear canal becomes hard and so, it is advisable to first soften the earwax by using oil or cream. Most of us use cotton swabs and earbuds to clean our toddler's ears. However, one needs to be careful while doing this as cotton swabs can potentially damage the eardrum and push wax further down the ear canal.

4. Use ear drops/oil recommended by the doctor 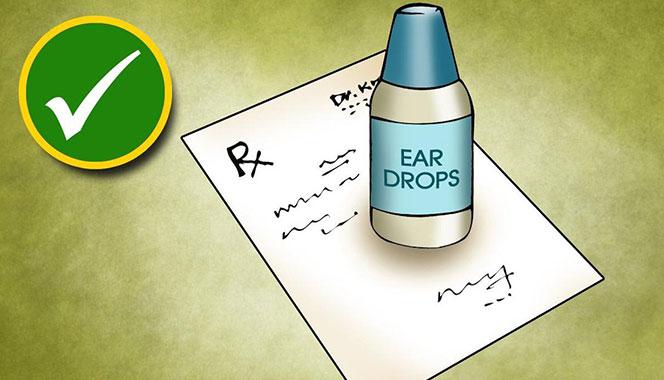 When using ear drops to soften earwax that has accumulated in your toddler's ear, make sure you use one that has been recommended by a doctor.

ENT experts recommend using olive or mineral oil to soften the baby's ears before cleaning them. In fact, oils are a major ingredient in many earwax removal drops and kits.

Illustrations by V Saravana Kumar Note: This method is to be applied only after consulting the doctor.

If the above-mentioned techniques do not work, it is best recommended that an ENT specialist or a doctor or a pediatrician should be consulted.

Regularly clean your toddler's ear canals and watch out for signs of discomfort and pain. If there's too much pain, visit an ENT specialist for expert advice and removal of the hardened earwax in an easy and comfortable way.

Practising good personal hygiene at school is essential for students to stay clean, healthy and safe from germs and illnesses. Here are some tips on how to teach personal hygiene to kids and students.

Christabel Acquah + some have read this

Human activities are polluting natural resources one of which is water. Polluted water is one of the gravest threats to our existence today. Read on to understand how to prevent water pollution

Are mosquito coils and repellents safe for a baby? Find out how you can use these products without harming your child

Mosquito coils and repellents are our go-to devices to ward off mosquitoes and avoid getting bitten. But, are these mosquito coils safe for a baby?