Want to dress up your child as Mahatma Gandhi for a fancy dress competition? Here is all the information you will need

In remembrance of the ahimsa fighter who was born 150 years ago, let's learn to live, dress and inspire like Mahatma Gandhi. Here are some tips to dress up your child like Gandhiji for fancy dress! 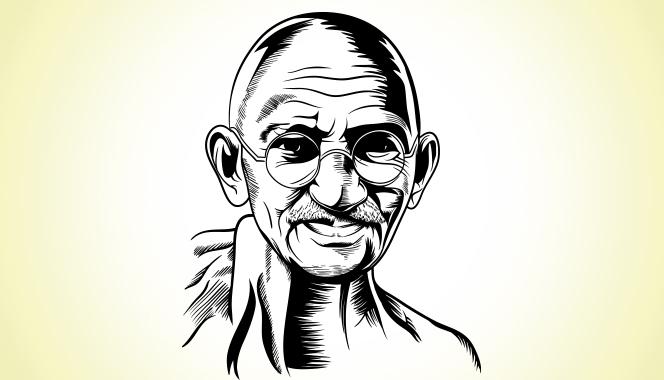 "In a gentle way, you can shake the world." - Mahatma Gandhi

And he sure did shake the world with his unshakable will.

Every year on 2 October, India celebrates the birth of its 'Bapu', Mahatma Gandhi, and the day is referred to as 'Gandhi Jayanthi'. Being a Government holiday, schools, colleges and offices remain shut. Most schools celebrate Gandhi Jayanthi a few days in advance. Students and teachers put up plays and conduct fancy dress competitions. Inspiring speeches are made that imbibe the principles of Gandhiji - discipline, non-violence, honesty, faith, peace and patience.

Gandhi was known for his simplicity and minimalist style of dressing. He wore a plain white dhoti and shawl for several years. The transition from an elaborate Gujarati attire to a simple dhoti and shawl happened on 22 September 1921. It bothered him and he wondered how he could work and identify with the masses if dressed differently from them. And thus, he changed his way of dressing. Today, if you draw a pair of spectacles, a white dhoti and a stick, even a small child would recognize it as Gandhi - such is the impact he has made to date.

In Gandhi's weekly publication Navjian, he describes the incident that led him to make this momentous changeover: "On the way (from Madras (now Chennai) to Madurai by train) I saw in our compartment crowds that were wholly unconcerned with what had happened. Almost without exception, they were bedecked in foreign fineries. I entered into conversation with some of them and pleaded for Khadi. They shook their heads as they said, 'We are too poor to buy Khadi and it is so dear.' I realized the substratum of truth behind the remark. I had my vest, cap and full dhoti on. When these uttered only partial truths, the millions of compulsorily naked men, save for their langoti four inches wide and nearly as many feet long, gave through their limbs the naked truth. What effective answer could I give them, if it was not to divest myself of every inch of clothing I decently could and thus to a still greater extent bring myself in line with ill-clad masses? And this I did the very next morning after the Madura meeting."

With this little story behind his dressing style, aren't you inspired to dress up your little one as Gandhi? Here is how you can do it!

Tips to dress up your child as Mahatma Gandhi

To recreate the iconic bald look of Gandhi all you need is a bald cap. A bald cap is nothing but a skin-colored wig-like cap that can be slipped onto the head. It replicates a bald look. You can also use a shower cap or a swim cap and brush it with a little foundation and blush, to give it a flesh-like look. If you feel that buying a bald cap is expensive and unnecessary, then grab a skin-colored fabric and simply wrap it around your little one's head.

Although Gandhi didn't have any hair, he had a beautiful mustache. You can buy a fake sticky mustache from your nearest costume shop. If you can't find a black and white mustache use chalk and color some of the hair white. However, some kids might find this itchy and bothersome. In that case, you can use a skin-friendly marker and draw a fake mustache.

You don't have to look for an expensive pair of glasses for this. Grab an affordable one from the nearest thrift store or online. You can also make a glass frame with old copper wire. Just twist it and shape it into round-rimmed spectacles!

For younger kids, there are many ready-made dhotis in the market. You just must wear it like a pant and drape the shawl around your torso. Meanwhile, elder kids can wear white dhotis. Wrap a long white fabric around the waist and secure it with a belt.

Picking the stick might seem like the easiest of all properties. But guess what, there are some factors to remember while picking the right one. The stick should be in the shades of brown and should be at least as tall as the shoulder height of your child. This is also safe, as your child might hurt himself or others with a bigger stick.

Mohandas Karamchand Gandhi was born on 2nd October 1869 in Porbandar, Gujarat. His parents are Karamchand Gandhi and Putli Bai. In his childhood, he was very shy and honest. He completed his early schooling in Porbandar and flew to England to pursue law. He came back to India as an advocate in Bombay high court. He later quit his job to join the freedom movement of India. He fought to eradicate social evils such as sati, child marriage, casteism, etc from the country. Under his guidance, India won independence in 1947. He died on 30 January 1948. He was shot three times in the chest by the assassin Nathuram Godse.

Mahatma Gandhi was born on 2nd October 1869 in Porbandar, Gujarat, to a middle-class family. His full name was Mohandas Karamchand Gandhi, born to Karamchand Gandhi, Diwan of Rajkot and Putli Bai. Gandhi had his early education in Porbandar and later flew to England for higher studies. There, he studied law and became a barrister. After coming to India, he joined the freedom movement of the country. He fought against untouchability, casteism, communalism, etc. and encouraged Hindu-Muslim unity and women education. He led the freedom fights in the path of Ahimsa. He said "God has vouchsafed to me a priceless gift in the weapon of Ahimsa. I and my Ahimsa are on our trail today. If in the present crisis, when the earth is being scorched by the flames of Himsa and crying for deliverance, I failed to make use of the God-given talent, God will not forgive me, and I shall be judged unworthy of the great gift. I must act now. I may not hesitate and merely look on when Russia and China are threatened." He was assassinated by Nathuram Godse, in the compound of Birla house. He died half an hour after he was shot three times in the chest. India still remembers this great leader.

1. Strength does not come from physical capacity. It comes from an indomitable will.

2. An eye for an eye only ends up making the whole world blind.

3. You must be the change you wish to see in the world.

4. Man is but the product of his thoughts. What he thinks, he becomes.

5. Non-violence is the greatest force at the disposal of mankind. It is mightier than the mightiest weapon of destruction devised by the ingenuity of man.

6. Anger and intolerance are the enemies of correct understanding.

7. Prayer is the key of the morning and the bolt of the evening.

8. My religion is based on truth and non-violence. Truth is my God. Non-violence is the means of realizing Him.

9. It is health that is real wealth and not pieces of gold and silver.

10. The greatness of a nation can be judged by the way its animals are treated.

As parents let's make use of this occasion to educate our children about Mahatma Gandhi and several other freedom fighters, who fought for an independent nation that we enjoy today.

The power of play: Here is how fun, traditional childhood games can help children thrive

Did you know that traditional childhood games help improve brain power in children? Read on to find out more in this article

Have a child who was born after 2000? Here are 20 things that you grew up with that he will never know

It has been twenty years since the launch of Yahoo Messenger! Can you believe that? ParentCircle takes a stroll down memory lane to relive life as we know it before this millennium!