9 Dangerous Things You Should Allow Your Child to do

Written by Sahana Charan and published on 17 July 2021.

Many children often lose an opportunity to do something exciting because their parents maybe overprotective. Letting them try a scary activity, with adult supervision, will boost their confidence 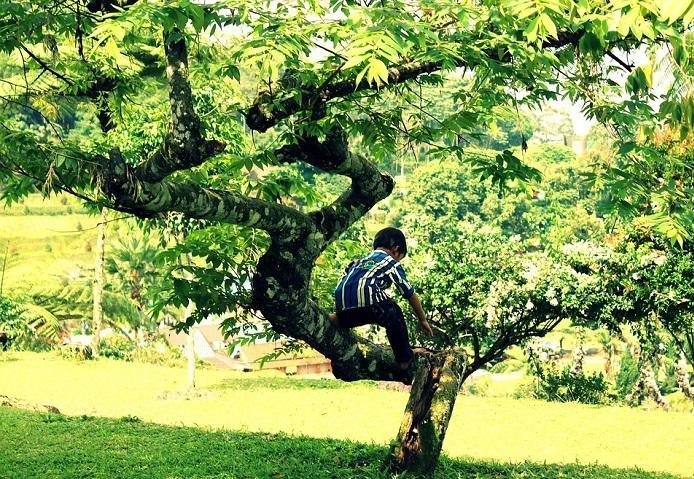 We hear of many unforeseen things that happen to children every day and in our bid to ensure the safety of our little ones, we parents often go to the extreme of adult supervision. The result, unfortunately, is that children miss out on the opportunity to try new experiences and explore their surroundings. In the process, children fail to learn how to be responsible for themselves.

When a child learns a new skill, such as climbing the gym or boiling water on the stove, there are high chances that he would hurt himself. But unless he tries it the first time, under the watchful eyes of a parent, there is little chance of learning that skill. Every time a protective parent says no to a certain activity with some element of danger in it, the child takes a step back in asserting his freedom and his confidence.

1. Handling kitchen equipment -- Children are curious about what goes on in the kitchen and it is a good idea to nurture this inquisitiveness. It is a risky place because of the knives and forks, the burners and the electrical equipment. But with a little supervision, the kitchen can provide a plethora of new experiences for the youngsters. Allow them to peel vegetables and fruits, teach them to hold a knife and let them stir a curry on the gas burners. The sense of achievement they have can be priceless.

2. Playing with fire -- Modern parents are petrified about this but it is not such a bad idea. With some adult supervision, allowing your child to light a match and make his own fire is something wonderful. Even as adults such moments can be fascinating and for a child, it takes him to a new level of feeling powerful. Help him collect fallen twigs and small branches, add some paper to build a fire. Teach him to use a matchstick so he knows how it feels to hold fire in his hand and light up his own bonfire. Now is the time to celebrate, so he will know that he has done something incredible.

3. Climbing heights - This could be climbing a tree, a window or the kitchen slab. "Don't do that or you are going to break your head!" sounds worse than "Wow! How did you climb so high? Can you do that again?" Children often need a pat on their backs for their super energetic skills. Climbing is one of them. Being on top and standing taller than the parent, gives them a feeling of achieving great heights. Just be watchful and make sure you are around to prevent a fall.

4. Using public transport - Most teens don't want their parents to accompany them to their high school and that might seem like an age factor but practically, it's only about growing up and wanting to do things on their own. Teens are children as well and they cannot think like adults but there has to be a "first time" and this is the right time. Allow them to use public transport on their own, while giving them some ground rules on safety. Appreciate the fact that they want to assert their freedom. When you congratulate them on their effort when they are back home safe, their self-esteem will get a boost.

5. Playing in the park gym and crawling through the tunnel - Some protective parents prevent children to climb the steep frames in the park or to go down a tunnel. They feel that the little ones will fall and hurt themselves or get scared once they are in the tunnel. Apart from the physical benefits of such activities, children learn to become responsible for their actions when they try such feats. Going down a tunnel, for example, gives them a sense of exploration and excitement. Since these activities are not overly risky, there is no harm in allowing kids to try them.

6. Using a penknife - Many school projects involve using a penknife for pre-teens. This might seem extremely dangerous, involving cuts and open wounds but a study shows that children may not be as smart as adults to know the danger behind such objects, but are excellent at learning to use them safely much quicker than us. Show them how its done and be around when they first practice using a pen knife to prevent any cuts. Letting them use with pen knives and cut papers only makes them better at using them.

7. Driving a car - If you have a teen who is eligible to get a license soon enough, it is important for parents to have faith in her, to teach her driving. The only way to boost her confidence is to make her complete the task with minimal help and lots of encouragement and appreciation. Instead of panicking and begging her not to touch the car, take her to an open road and teach her to move the vehicle. The elation the youngster feels will be worth the effort.

8. Riding the bicycle/skateboard - "It really is okay to break bones"- we have heard this often from our grandparents but it's easier said than done because we just don't let our children risk themselves for the sake of play. Riding a bicycle at maximum speed, using a skateboard or skate shoes can make parents anxious but with a little audience, children learn fast to do such activities on their own. They may fall a little in the beginning, It helps them grow stronger physically and smarter psychologically. They learn a skill and the feeling of "I can do this!" boosts self-belief.

9. Playing in the mud/sand -- Parents often snap at children, when they play with mud or sand. In fact, to their bewilderment, the little ones love the touch of mud and spend hours doing this activity. The fear of infections and of contracting allergies, make parents wary of their children playing in the mud. On the contrary, being exposed to these microbes can help boost up their immunity and make them stronger.

What Children Learn When They do Dangerous Things:

1. To use their imagination and the spirit of exploration

2. To be confident and speak up for themselves

3. To take responsibility for their actions

4. To work together and build team spirit

5. To experiment and question different concepts

Children are susceptible to danger and parents have to look out for them. But being protective does not mean that you keep them away from doing things that will teach them important life lessons. So, go ahead, hold your breath and allow your little ones to indulge in some 'dangerous' activities.

Long summer holidays are good opportunities to delve into new activities. For teens, this can be a good time to catch up on reading, especially as a way of exploration to mold their identities.

Roopa M + 2 more have read this

Cool, nerdy, protective or absentminded, dads are unique in their own way. So, what type is your dad? Find out here!

Rithika Bhattacharya's Mom + some have read this

A wholesome, nourishing breakfast sets the family up for the challenges of the day. Here are three simple recipes that will give your mornings an energy boost!