A doting father shares his experience of raising a daughter almost single-handedly when the mother had to go abroad for work and how, years after, nothing has changed 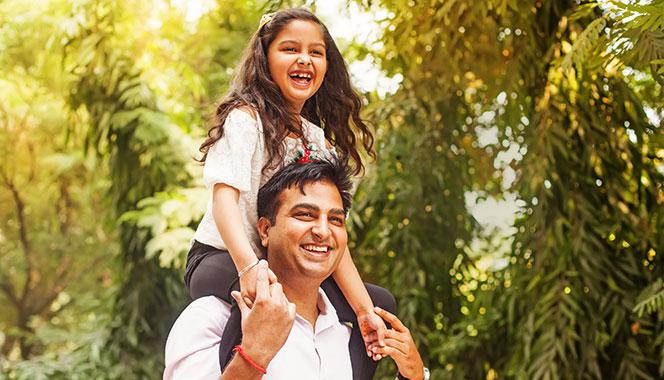 When my wife left for her first foreign assignment, we waved a cheery bye, but with a heavy heart. My brave little daughter held back the big tears just long enough until her mother went inside and could no longer be seen.

And thus began our new life as a father-daughter team. We moved back to our familiar city of Bangalore, but to a 'new-old house' - new, because we had just bought the house, old because it was an old house on a small plot. A new neighborhood meant new adjustments. Our days began with the alarm going off stridently at 5.00 am. I would quickly turn it off, so as not to awaken my Chimmi, to allow her an extra hour of blissful sleep. I would then roll out the chapatis, cut vegetables for the portal, and get two tiffin boxes ready, one each for the short and long break.

The funniest 'contributors', who helped me decide the menu for the next day, would be her friends who would call me up and place their 'orders' for lunch the next day - "Uncle, the paneer was very good. Send some more!" And this trend carried over to her college days.

Boiling the milk came next, followed by the preparation of Complan for my growing girl, all the while trying to wake up my little monster All parents know that waking up a child is no less difficult than an expedition to the mountains!

But I successfully accomplished that till I came to my next hurdle- plaiting her hair! Each time I thought I had got it right, she would look worse than before. And girls at that age crave long plaits, though they will happily chop it short once they can plait it on their own. God came to my rescue; he sent help in the form of our maid who did the braids with expertise.

Next came the trek to the bus stop where the school bus would arrive, and cart her away for the day. Although it happened daily, it was like a long parting. I think life teaches us early that we have to get used to parting from our children, especially our daughters.

My life would re-start with Chimmi at 3.30 pm when she returned home. I would get her to eat some lunch and march her off to the tuition class.

As we were in a new neighborhood, my next big task was to find friends for Chimmi to play with for one precious hour every day. Since we were in a friendly place, and Chimmi was a true extrovert, soon I had lots of children running in and out of our home until late evening. I feel that as parents we should help our children create this social fabric of friends.

The weekends would loom large on us, but we soon found a way to spend them. We would visit our family, swim at the club, and have outside food, a respite from Daddy's cooking! This is when we understood the importance of family bonding, which children learn to appreciate later.

In those days, I did not realize how crucial these years would turn out to be. But now, though she is all grown up, the 'father-daughter team is still going strong!

How to Talk to Your Preschoolers Teacher

After you enroll your child in school, the next step is to develop a good working relationship with her teacher. Read on to understand how to talk to the person who is molding your child's future.

7 Useful Hacks For Working From Home Parents With Toddlers

Many parents wish for a setup where they can take care of their kids while they work from home. Achieving the perfect balance between both duties requires planning

Jyothi Prabhakar + 13 more have read this

How Parenting Has Changed In The Past 25 Years

You take pride in being a modern parent. But, when you look back at your own childhood, were your parents just as modern? Does your parenting style reflect your experiences as a child?