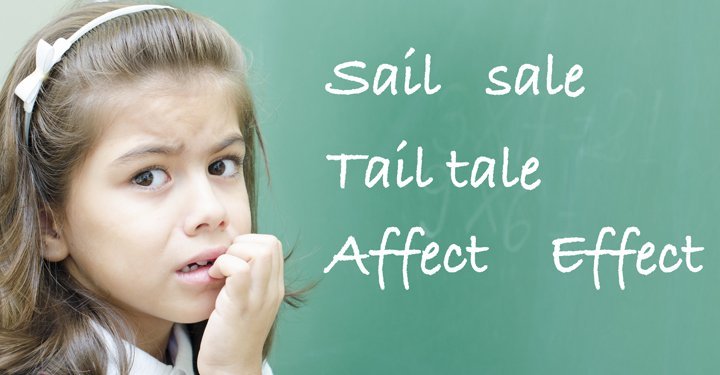 Words - they are more than mere scribbles to fill blank spaces. They carry weight, meaning and even a tone, that decide how the reader perceives what he reads. A badly written sentence or a phrase is as jarring as a professional singer hitting the wrong note. It takes the reader away from the story or the message that the writer intended to put across.

And, when it comes to the English language, it can be a tricky subject to master. No matter what your level of proficiency is or how long you have been training in it, there are times when even a connoisseur has to reach out for the dictionary.

One of the most confusing aspects of the language are pairs of words that sound the same but have different spellings. They are called homophones. Examples: flour, flower and soul, sole.

The wrong usage of a word can completely change the meaning of the sentence and confuse the reader. Here's a list of such confusing word pairs -

1. Ad (an advertisement); add (sum up numbers to get a total)

My child saw this ad and understood how to add numbers.

2. Air (a mixture of gaseous matter that contributes to the Earth's atmosphere); heir (the inheritor to a person's title or property after the person's death)

The air was stale in the room where the heir to the throne was held prisoner.

She raised her arms and asked for alms.

4. Altar (a raised platform, table or a block); alter (to change something)

The engineer was asked to alter the design of the altar.

5. Bail (a guarantee given (often financial) in exchange for procuring the release of an accused person); bale (a bundle)

She was released on a bail of Rs 500 for stealing a bale of cotton.

6. Ball (an object used for playing games); bawl (the act of crying loudly)

He gave out a bawl when he missed hitting the ball.

She used to be a part of the band but recently she was banned from the group.

The bear chased the bare-footed man.

Near the beach, you can find many beech trees.

10. Bean (a kidney-shaped seed people eat); been (to have been present in the past)

The bean soup had been served as a delicacy.

11. Bell (a hollow metal object that makes a ringing sound when hit with a smaller metal object fixed inside it); belle (a beautiful woman or a girl)

He rang the bell and the door was opened by a belle.

The lady in the lower berth gave birth to a baby.

13. Boar (a wild pig); bore (here, a person who tires you by telling uninteresting things)

The man who took the boar to the market was known as a big bore.

14. Board (A wooden panel); bored (feeling dull or uninterested)

The carpenter sawed the board but looked very bored while doing it.

15. Bold (being brave); bowled (here, to throw a ball to a batsman in cricket)

It was a bold move, the way the spinner bowled.

16. Hair (what grows on the head and body of mammals); hare (a rabbit)

The hare was so scared that its hair stood on end.

He bought a pair of socks and a pear.

Your idol is not an idle dreamer.

You can't flee this place because of this annoying flea.

The pale woman filled a pail of water.

So, bye for now. I will buy the groceries, then stop by the post office and be back soon.

I have a sore in my left eye.

Our train should have come an hour ago.

He was billed extra but the structure he had asked them to build was not satisfactory.

2. Bury (here, to hide something in the ground); berry (a small fruit that grows on a bush)

She saw the naughty pup bury the berry in the sand.

The well-bred dog queued up at the bakery every morning for bread.

You cannot butt in when I speak, but you can ask your doubts later.

5. Foul (bad or obscene); fowl (a bird, especially one kept for meat and eggs)

It was a foul-smelling fowl.

7. Storey (a floor in a building); story (an account of real or imaginary people or things)

The story goes that this building initially had two storeys.

Struggling to walk with his odd gait, he leant against the gate.

You should credit her good looks to her genes. No wonder she looks good in jeans.

The circus artist was taught how to keep his balance on a taut rope.

11. Gorilla (an ape); guerrilla (a member of a revolutionary group of soldiers)

Humans, not gorillas, came up with the concept of guerrilla warfare.

We spotted a grisly, grizzly bear.

Though she was a grown-up, she was groaning like a teenager.

He can run through a hailstorm, he's so hale and hearty.

15. Hangar (a large storage space to keep an aircraft); hanger (something to hang clothes on)

The pilot steered the aircraft into the hangar. Then, he got out and hung his coat on a hanger in the pilot's lounge.

She followed the course of the river, even though it was covered in coarse sand.

Beat the beet in the mixer.

Nothing can faze him. He considers it all as just a passing phase.

He was the sole person to offer comfort to the poor soul.

The maid knew what a well-made bed looked like.

This scene was something she felt she had seen before.

He wrung out the wet cloth and placed it on the rung.

23. Seam (a line along which two edges of a cloth are joined); seem (to appear)

The dress is bursting at the seams, it seems.

The thief broke open the steel almirah to steal cash.

25. Throne (a chair where royalty sit); thrown (having been pushed out)

The evil queen was thrown out of her throne.

Hope your child has fun learning these confusing word pairs. Ask him to come up with more such words and help him sharpen his English language skills.

10 Fun Things to Do With Young Children

Wondering how to keep your little one entertained at home? Well, youve got to read this. Here are 10 fun activity ideas to liven your family time!

PANNEER SELVAM + some have read this

How To Organise School Work To Avoid Stress

With school about to begin, are you worried about how to get your child ready to face another year of tackling loads of schoolwork? Here are some tips.

Raje + some have read this

What You Should Do When Your Child Gets Poor Marks

When children get poor marks, it upsets them and their parents. We tell you what to do and how to respond when your child gets a low score.