Interesting Facts About Republic Day That Every Kid Should Know

On this Republic Day, here are some interesting facts for kids about why January 26 is celebrated as Republic Day, the celebrations at Rajpath, and the National Bravery Awards for children. 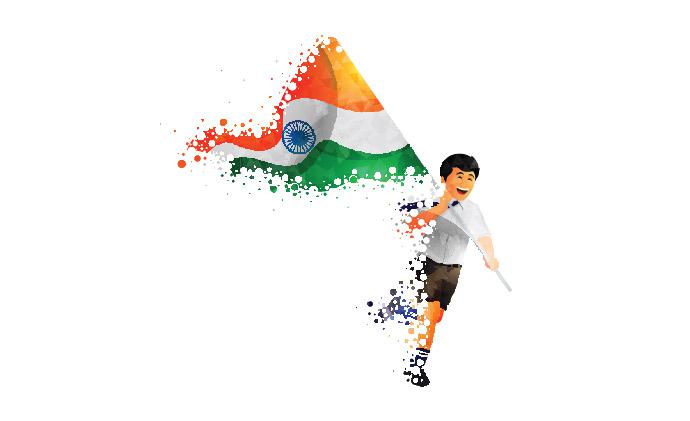 What better time than now to impart some Republic Day facts to your child? On, 26 January, when India's Republic Day is celebrated, is more than just a national holiday. It is also more than the grand parade and tableaux that showcase the military strength and cultural diversity of our country. It is a day to pay tribute to those who lost their lives fighting for our nation's freedom.

The Republic Day is also an occasion to commemorate the coming into effect of our Constitution, which is the governing document of our country. And, it is also the time to honor remarkable feats of individuals with awards such as Gallantry awards, National Bravery Awards for children, and so on. Hope these 36 interesting Republic Day facts will instill national pride and patriotism in your child. Happy reading and Happy Republic Day wishes! And, here we go with our collection of Republic Day facts...

1. The word 'republic' means 'a country that is governed by a president and politicians elected by the people and where there is no king or queen'. (Oxford Learner's Dictionaries)

India's Republic Day and its significance

2. The first Republic Day was celebrated on 26 January 1950, signifying the coming into force of the Constitution of India which replaced the Government of India Act (1935) as the governing document of India.

Republic Day's history: Why is it celebrated on 26 January?

3. The Indian National Congress passed the historic 'Purna Swaraj' (total independence) resolution on 19 December 1929. Following this, on 26 January 1930, a public declaration was made by the Congress Party urging Indians to celebrate the day as India's Independence Day. After India attained independence, it was decided to commemorate this day as Republic Day.

4. Republic day celebrations are spread across three days, beginning with the Prime Minister of India paying tribute to soldiers who sacrificed their lives for the nation, at Amar Jawan Jyoti, India Gate. The President then hoists the Tricolour at the Red Fort to the accompaniment of the National Anthem. Then the ceremonies begin with a 21-gun salute. The celebrations conclude with the Beating Retreat ceremony by the armed forces (Army, Air Force, Navy) on 29 January at Raisina Hill.

5. The Republic Day celebrations at Rajpath (the road leading to the Rashtrapathi Bhavan) began in 1955.

6. Since 1950, the Christian hymn, 'Abide with me', has been played at the end of the Republic Day celebration when the national flag was taken down in a solemn ceremony. It was one of Mahatma Gandhi's favorite songs.

7. Many significant awards such as the Bharat Ratna, Padma Bhushan, Veer Chakra, Ashoka Chakra, National Bravery Awards for children, and Kirti Chakra are given away by the President on this day.

8. During the 70th Republic Day parade on 26 January 2019, as many as 22 tableaux showcased the life of Gandhi in commemoration of his 150th birth anniversary.

10. Another significant aspect of the 2019 parade was Major Khushboo Kanwar leading an all-women contingent of Assam Rifles.

11. Until 1984, the President used to arrive for the Republic Day parade in a horse-drawn carriage, after which it was discontinued for security reasons. However, in 2014, President Pranab Mukherjee revived the tradition by arriving in a ceremonial buggy for the Beating Retreat ceremony at Raisina hill, in New Delhi.

12. The Ministry of Defence has a well-established system in place for the selection of tableaux to participate in the parade. It invites proposals from all the States, Union Territories, Central Ministries, and other important departments. An expert committee comprising key persons from various fields such as art, music, culture, and architecture evaluates the proposals. The evaluation is made based on the theme, concept, design, and visual effects.

13. While the Prime Minister addresses the nation on Independence Day, the President gives the Republic Day message.

14. During the Republic Day celebrations, India hosts another country as the state guest of honor. The guest country chosen is based on the deliberation of strategic, economic, and political interests. The head of this country is the chief guest for Republic Day.

15. Our chief guest during the 1961 Republic Day celebrations was Queen Elizabeth from Britain, the very nation from whom we gained independence!

16. The first chief guest of the Rajpath parade in 1955 was the first governor-general of Pakistan, Malik Ghulam Muhammad.

The Constitution of India

18. The Indian Constitution with 448 articles is the longest in the world (At first, there were 395 articles).

19. The Constitution was drafted by a special seven-member Drafting Committee headed by B R Ambedkar. It took them 2 years,11 months, and 17 days - a monumental task indeed!

20. The Constitution was hand-written in Hindi and English with 284 members affixing their signatures on it.

21. The original draft of the Indian Constitution consisted of 234 pages written on microbe-resistant parchment sheets whose shelf life was said to be 1,000 years. The manuscript weighed 13 kg.

22. The first edition of the Constitution is a work of art - done in calligraphy by Prem Behari Narain Raizada (using a holder and a nib) and illustrated by a team of artists from Shantiniketan headed by the Artist Laureate of India, Nandalal Bose.

23. The illustrations on the pages of the Constitution represent styles from different civilizations of the subcontinent, ranging from the prehistoric Mohenjodaro civilization to the present times. Indigenous methods were used for the illustrations involving gold leaf and stone colors.

24. The original hand-written copies are preserved in the Parliament's library in helium-filled cases.

25. 1,000 photolithographic reproductions of the Constitution were made from the original.

26. In 2018, Chennaiite Vijay Anand brought out replicas of the first edition of the Constitution from the digital copy available online.

27. It has borrowed the best concepts from the Constitutions of other countries. The concept of 'Liberty, Equality and Fraternity' has been modeled on the French Constitution and that of the five-year plans has been taken from the Russian Constitution.

29. It takes 52 seconds to sing or play the National Anthem.

30. The State Emblem of India (an adaptation from the Sarnath Lion Capital of Ashoka), was first adopted on 26 January 1950.

The national flag of India

31. In 1923, the version of the flag closest to the present form came into existence. It was designed by Pingali Venkayya. In 1931, a resolution was passed to adopt the Tricolour as the National Flag of India. On 22 July 1947, the current form of the flag was adopted by the Constituent Assembly of India.

32. The Tricolour is horizontal and rectangular in shape with three bands - saffron (signifies strength and courage), white (symbolizes peace and truth), and green (denotes fertility, growth, and auspiciousness of the land). At the center of the white band is the Ashok Chakra in navy blue. This wheel has 24 spokes. It stands for righteousness, justice, and forwardness. It also symbolizes constant movement heralding progress.

34. Adhering to the flag code of India, the Indian National Flag is made from hand-spun and hand-woven wool/cotton/silk Khadi bunting.

35. At the moment, there is only one licensed flag production and supply unit in India - the Khadi Development and Village Industries Commission. As of 2009, the responsibility lies with the Karnataka Khadi Gramodyoga Samyukta Sangha.

36. The Indian Tricolour: Some dos and don'ts

On this 71st Republic Day, let us, as a nation, recall Rabindranath Tagore's words and hope that the soul of unity in diversity is kept alive!

Where the mind is without fear and the head is held high
Where knowledge is free
Where the world has not been broken up into fragments
By narrow domestic walls
Where words come out from the depth of truth
Where tireless striving stretches its arms towards perfection
Where the clear stream of reason has not lost its way
Into the dreary desert sand of dead habit
Where the mind is led forward by thee
Into ever-widening thought and action
Into that heaven of freedom, my Father, let my country awake.

Want your child to develop a good civic sense? Here are a few interesting ways to do so.

From being positive to learning to forgive, kids can learn many valuable life lessons from the teaching of Mahatma Gandhi. We bring you 10 important ones

Karthika + 1 more have read this