How do you describe an eclipse to your child? Here is how to explain the solar eclipse and lunar eclipse to kids in simple terms and with the help of diagrams and images. What is an eclipse?

An eclipse is a natural phenomenon that occurs when one celestial object passes into the shadow of another. This is commonly seen when the earth and the moon form a line with the sun.

When the moon's shadow falls on the earth it is called a solar eclipse.

A lunar eclipse happens when the earth blocks the sun's light causing its shadow to fall on the moon.

What types of eclipses are there?

On earth, we can experience two types of eclipses: The solar eclipse is the most spectacular celestial event visible from the earth. In ancient times, the solar eclipse was believed to be a supernatural phenomenon and attributed to the act of gods. In China, people believed that a dragon had swallowed the sun and traditionally banged drums and pots to scare it away. Even today in some cultures, it is considered a bad omen and people shut themselves indoors and refuse to touch food or drinks.

So, what exactly is a solar eclipse?

During its orbit around the earth, the moon comes in between the sun and the earth. This causes the shadow of the moon to fall on some parts of the earth's surface. The day plunges into total darkness just like a night in these regions in the case of a total solar eclipse. If it is a partial solar eclipse, there may be a twilight-like appearance during the day, and daylight returns once the phase of the eclipse is over.

What is meant by umbra, penumbra and antumbra? The shadow of the moon during an eclipse has three parts. One is the umbra, which is the dark shadow formed when the moon completely blocks the sun's light. A total eclipse occurs in the places this dark shadow, also called the zone of totality, happens to fall.

When the moon is further away from the earth, it appears small and does not cover the sun's disk completely. The shadow formed by such an eclipse extends beyond the umbra and is called the antumbra. The sun appears as a ring around a dark moon when viewed from within the antumbra (annular eclipse).

In areas where the moon partially covers the sun, a lighter shadow is projected on the earth's surface which is called the penumbra. A partial solar eclipse can be viewed from these regions.

A solar eclipse occurs only when the moon is in the new moon phase. This means that the illuminated portion of the moon is facing away from the earth. Essentially, several factors need to happen simultaneously for an eclipse to happen making it a rare natural event. On average, 2 to 4 solar eclipses in the same calendar year are known to occur.

There are 3 main types of solar eclipses:

How to view a solar eclipse

Never try to view a solar eclipse without using proper eye protection. The sun's rays can seriously damage your eyes and can even blind you. Also, avoid looking at the sun with binoculars or a telescope. Here are some safe ways to look at a solar eclipse. During a lunar eclipse, the sun, the earth, and the moon come in a straight line with the earth in between the sun and the moon. This prevents the sun's light from reaching the moon and the earth's shadow falls on the moon's surface making it appear darker.

The lunar eclipse happens only on a full moon day, i.e. when the illuminated surface of the moon faces the earth.

The moon's orbit around the earth is slightly tilted (5 degrees). The earth's shadow fails to fall on the moon during every eclipse as the sun isn't exactly aligned with the earth and the moon. We do not have a lunar eclipse every month due to this reason.

What is a blood moon?

During a total lunar eclipse, the moon appears to have a reddish hue from the sunlight filtering through the earth's atmosphere. The term 'blood moon' is attributed to this reddish color of the moon.

The three basic types of lunar eclipses are:

What is the difference between a solar eclipse and a lunar eclipse? 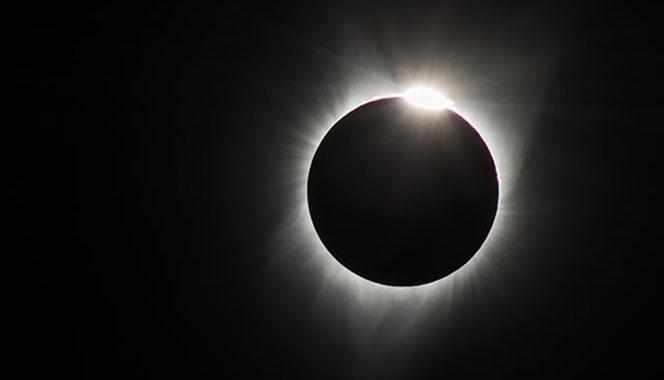 An Interview With Rakesh Sharma, The First Indian Astronaut

The moon and stars have fascinated every human being, but only one in a billion Indians has gone close to them. Rakesh Sharma, the first Indian in space, tells us about his incredible journey.

Habib Imran + some have read this