Traditional Indian games and their benefits for kids. Have you tried them yet?

These traditional games of India will not only keep your child entertained and active but also keep him away from gadgets. So, read on to know more about traditional Indian games and their benefits 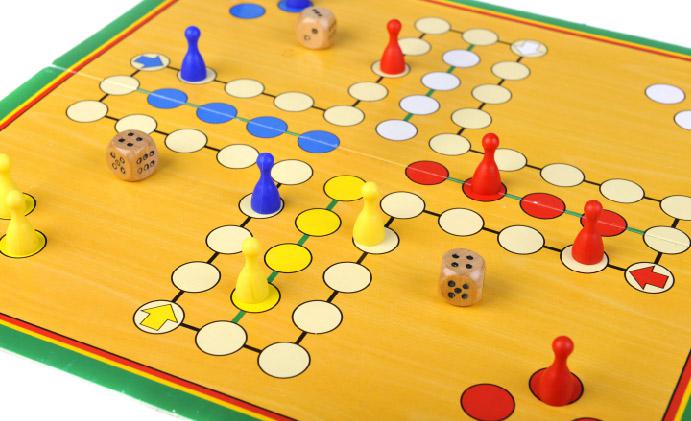 Sadly, in today's age, children are constantly glued to television and electronic gadgets. So, let us learn about a few traditional Indian games, how to play them with your child, and their benefits.

History:
This game is believed to have originated during the rule of the Chola dynasty in South India. It is also referred to as Channe Mane in Karnataka.

This two-player strategic game involves counting pieces (stones, seeds or beans) and placing them into holes/cups on a board or pits in the earth. The pallanguzhi board consists of 7 holes/cups in 2 rows. In both the rows, the cup at the centre is called Kasi.

The objective of the game is to capture as many pieces.

History:
This is a very old game and is believed to be the national board game of India. It finds mention even in our history and mythology, with a legend indicating the Pandavas and the Kauravas played this game in the Mahabharata.

The name Pachisi is based on the number 25 (called pachis in Hindi), which is the highest score a player can earn in the game.

The game is played between 4 players divided into 2 teams, with 2 players in each team. The partners sit opposite to each other. The Pachisi board has 4 arms, which meet at the centre of the board. The centre is called Charkoni.

The objective of the partners is to move their 8 pieces through the arms of the board and then re-enter the Charkoni.

This game is believed to have originated in India in the 6th century. It is derived from Pachisi. It is also depicted on the walls of the Ajanta caves. It was also a favourite of many Mughal emperors like Akbar and Babar.

Ludo is a game played by 4 players split into 2 teams, or by 2 players. Team members sit opposite each other.

The ludo board has 4 bases of different colours (1 base for each player). The board also has 4 arms, which meet at the centre of the board.

On each arm, there are 3 rows with 6 squares in each row (similar to the Pachisi). One square touching the base has a different colour to indicate that this square is a Castle. It is also the starting position from where a piece begins its journey around the board.

This is a board game with squares numbered from 1 to 100. Some of the squares have ladders and snakes with ends reaching another square. The objective is to begin at the first square and reach the last one, taking ladders for shortcuts and avoiding the snakeheads.

Although there is no specific reference to the history of this game, Lagori is a traditional game that is believed to have been played for generations in rural India.

Playing with small stones or pebbles was a caveman's game. Going by that logic, the origin of Kancha can be traced to the early days of mankind.

This game, remarkably similar to cricket, is believed to be more than a thousand years old dating back to the Mauryan Dynasty.

This traditional is similar to hopscotch and dates back to the 17th century.

Note: Parental supervision is essential for all the games since they use items like pebbles, marbles and wooden logs.

Take our 14-day challenge and discover fun ways to connect with your family. Today is 'Family Harmony' Day! Sing with glee and set yourselves free

Take our 14-day challenge and discover fun ways to connect with your family. Today is ‘Fun Family Facts’ Day. A day to get to know a bit of family history

Kerina De Floras + some have watched this