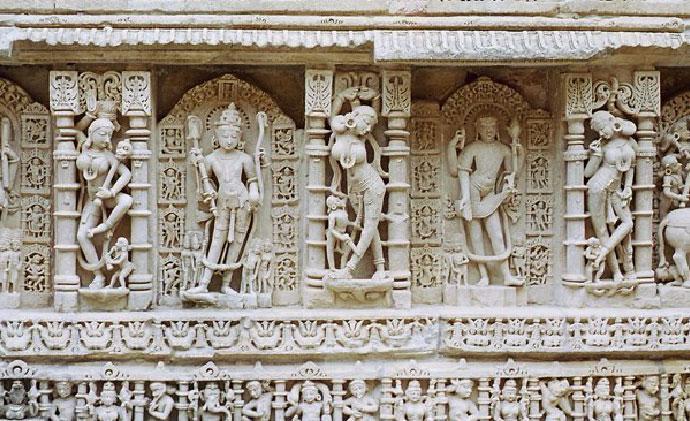 These Intricately carved walls are part of Rani Ki Vav

Located on the banks of the river Saraswati, Rani Ki Vav is one of the best examples of the long tradition of step wells of ancient India. (Image on top) Built over seven levels in the form of an inverted temple, the structure was not only employed to reserve water but also to underscore the sanctity of the resource. Intricately carved religious, mythological and secular sculptures adorn every surface of the well. It was added to the UNESCO World Heritage Sites list in 2014.

2. Group of monuments at Pattadakal

This is the oldest surviving temple group from the Chalukya kingdom. The group of temples beautifully infuses northern and southern styles of architecture, drawing inspiration from a wide range of sources. They mark the beginning of structural temples. The shrines and sanctuaries are symbolic of the Dravidian, Rekha, Prasada and Nagara styles of construction. The temples joined the UNESCO World Heritage Sites list in 1987. It is famous for the great Stupa

Dated between the 2nd and 1st century BC, the group of monuments at Sanchi makes up the oldest Buddhist sanctuary in history. The Great Stupa is the oldest of the structures and is also the most well-preserved. Commissioned by Asoka the Great, the hemispherical dome was first built with bricks and then overlaid with stone during its expansion thus making it twice its original size. Symbols, motifs and ornamental depictions furnish the entire structure. The monuments were added to the list of UNESCO World Heritage Sites in 1989. Located in Panchmahal district in Gujarat, it is still largely unexplored

An assortment of forts, palaces, halls of worship, city blocks, agricultural and water reservation facilities, most of which still remain unexplored and unexcavated, make up the Champaner-Pavagadh Archaeological Park. They can be dated from the 8th to the 16th century AD. There is also evidence of occupation during the Chalcolithic (the period that gave way to bronze) period in this site. It houses a pre-Mughal Islamic city that has remained unchanged. The Kalika Mata Temple and the Jama Masjid are two of the most popular attractions of this place. This park was added to the ranks of UNESCO World Heritage Sites in 2004. Seven hundred rock shelters grouped in five large clusters at the southern edge of the Vindhyan Mountain Range made it to the list of UNESCO World Heritage Sites in 2003. The paintings found in nearly 400 of them are the reason behind it. These paintings go as far back as the Mesolithic period. The type of carvings and the tools believed to have been employed here explain the lifestyles of civilization from the Palaeolithic period, right up to the medieval period. The paintings showcase a range of animals and battle scenes in abundance. This temple is rebuilt and restored several times

Commissioned by Emperor Asoka, the site of the Mahabodhi temple is believed to have been the place where Gautama Buddha attained enlightenment. Built entirely using brick, this is one of the oldest Buddhist temples in India. The first temple was built in the 3rd century BC. The complex houses other temples which were added in the 5th and 6th centuries AD. The Bodhi tree (also known as the peepal tree) in the complex is believed to be a direct offspring of the one under which Buddha sat to meditate. The temple complex was added to the list of UNESCO World Heritage Sites in 2002.

What are you waiting for? Pack your bags and get set on a heritage journey with your child to explore the diverse cultural history of our nation.

Planning A Trip With Your Child? Here’s Everything You Need To Know

Travel can benefit your child in so many ways. But are you apprehensive about taking them along? Here are some pointers to help you avoid the stress and make it an enjoyable trip!