India has not only given the world the game of chess, but also the second youngest Grandmaster in Praggnanandhaa. The child prodigy and his family talk about his love for the game and future plans. 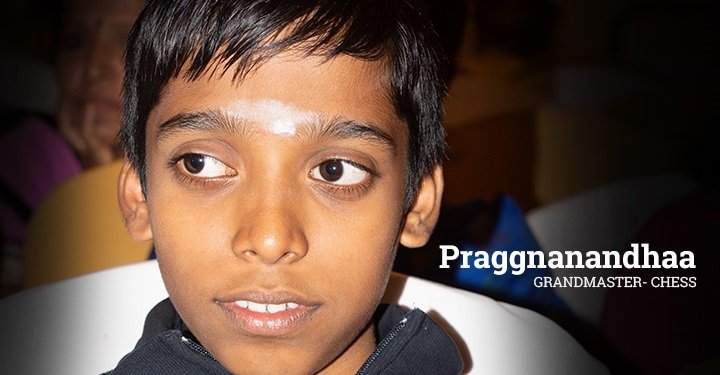 When Rameshbabu Praggnanandhaa became the world's second youngest Grandmaster, it was the culmination of a journey in chess that began when he was barely three years old. At only 12 years and 10 months, he has become India's youngest Grandmaster. Yet, the child prodigy remains grounded and unaffected by the magnitude of his feat, and continues to live and love chess, above all.

The Ramco Group has been an active part of Praggnanandhaa's success, and felicitated him at a grand function in Chennai. ParentCircle was also present to applaud the young champion. After the event, while waiting to talk to Praggnanandhaa, who was busy accepting congratulations and accolades, we got the opportunity to talk to his parents, Rameshbabu and Nagalakshmi. Here are excerpts from the conversation:

Tell us about your family.

How did your son get interested in playing chess?

It was mere coincidence. His sister was interested in chess - she has won national level certificates thrice and is a Woman International Master. When Praggnanandhaa was a young child, he used to spend a lot of time watching her play. So, we thought it was better to encourage him to play chess than let him watch TV programmes.

At what age did Praggnanandhaa begin showing an active interest in playing chess?

By the time he was three, he was playing chess regularly. When we realised how interested he was in the game, we began thinking about enrolling him for coaching. So, when he was four, we enrolled him in Bloom Chess Academy Training Center.

Improving your game is a step-by-step process. The first step is to win two-day tournaments conducted by various academies. These wins increase the child's confidence and ranking. The next step is to participate and win matches at the state, national and international levels. Praggnanandhaa crossed all these levels in quick succession, and has now become the second youngest chess Grandmaster in the world.

How many matches has he won so far?

Two Gold Medals at the Asian Level and two Gold Medals at the World Junior Level. In Pune, he participated in (when he was less than seven years of age) a national-level tournament and secured the second position. He has also won several silver and bronze medals in other competitions.

Do you offer him a special diet?

Nothing like that. He eats what his mother cooks for the family. But, we make sure that we don't give him junk food.

What about his school? How do they support him?

He studies in Velammal School in Mogappair, Chennai. The school principal and staff are very supportive. The school even provides financial support when he goes to play outside.

Is it any different parenting a child who is inclined towards sports?

No, not at all. If a child is interested in sports, we shouldn't pressurise him to perform well. We just need to support and encourage him. We are happy when he wins. Even if he doesn't, we just encourage him and say, 'Don't worry, you will do better next time'. I believe that hard work, encouragement, and God's grace leads to success.

What is your day-to-day role when he is participating in tournaments?

I usually take care of things like booking tickets and accompanying him to the tournaments, which takes up a lot of my time, but now my wife also pitches in.

Is it expensive to prepare for a chess tournament?

Yes, there are academy training fees and travelling fees for tournaments conducted in different cities and countries. International travel is especially expensive.

Do you have any sponsors?

The Ramco Group has been offering us a lot of support.

How would you feel if, at some stage, Praggnanandhaa's interest changes?

We will support him then as well. Whether it's extra-curricular activities or academics, we will never force our child.

What is your message for other parents?

The world around us has changed and the time we live in is different from when we were growing up. So, today's children are different. It is essential that we maintain a healthy relationship with our children. It's only then that they can open up to us. This is important, because they need someone to confide in, and that may not always be possible with their friends. Moreover, it is very important to be patient as a parent.

At this juncture, Praggnanandhaa also joined in. Here's what he had to say:

Chess is considered a very tough sport. What made you choose this?

My older sister, Vaishali, is the one who inspired me. I used to eagerly watch her play. I was fascinated by the chess board and chess pieces. And, by the time I was three and a half years old, I had begun playing as well.

Chess requires long hours of concentration. How do you manage to focus for so long?

Hmmm...while I am playing chess, I occasionally take my eyes off the chess board to look at something else, or observe those around me. And then, I go back to my game. That's how I stay attentive and focused.

Do you think about your opponent's likely moves, before making your own?

Of course, some of the moves I make are calculated. But, it is important to be spontaneous too. If my opponent changes his moves, I also alter my moves accordingly or, change my game plan.

How do you balance chess with your studies?

It isn't that difficult. I usually study for an hour every day and practise chess for four to five hours.

What do you do when you are not playing chess or studying?
Nothing much, I like to relax completely. I like to draw, and play other sports like badminton and table tennis.

What are your future plans?

My focus is to increase my ratings.

What is your advice to parents who want their child to be like Praggnanandhaa?

First, the child should be interested in the game. If parents are ambitious and the child is not, it will not work in the long run. If the child is willing to learn, then the parent's role becomes very important. They should define a clear long-term strategy to support their child and let him learn at his own pace. They shouldn't rush or pressurise him to perform. It's very important for parents to exercise patience.

Moreover, parents need to enrol their child in a good chess academy. Nowadays, most major cities and even smaller towns and cities have good coaching centres. The district or state association can help as well. There are also websites the child can be enrolled in to practise and play online. Most sites offer free membership and give the child the opportunity to play against players from around the world. Playing regularly is very important.

Remember, it is vital that the child plays chess every day. It is also a good idea to get books and literature related to chess. For very young children, I recommend 'The Step Method' series of books. But most importantly, always be supportive of what your child does.

Immensely proud of the little bundle of talent .He is the future hope of our country in chess after Vishy. We hope he reaches greater heights .

Dr Swaroop Rawal, one of the finalists of the Global Teacher Prize 2019, believes life skills should be a part of the school curriculum. This super achiever also proves that learning never stops!

While teaching helps children learn, does it make kids love learning? Read on to know how to make your child love reading.

Grappling with the mosquito menace? While you take them head on, here's a round-up on some interesting mosquito facts for you and your child.